Inspired by the human body and the built environment humans construct and inhabit, the artists in Embraces explore the myriad ways to document important and complex aspects of contemporary life. Through depictions and abstractions of the physical and psychological conditions defining the human body - how it occupies and interacts with spaces - each artist transforms the physical experience into her unique aesthetic and conceptual language. Curvilinear and architectonic forms evoke pain and pleasure, as well as exposing vulnerability and calling for a deeper connection to the self.

Inspired by the human body and the built environment humans construct and inhabit, the artists in Embraces explore the myriad ways to document important and complex aspects of contemporary life. Through depictions and abstractions of the physical and psychological conditions defining the human body - how it occupies and interacts with spaces - each artist transforms the physical experience into her unique aesthetic and conceptual language. Curvilinear and architectonic forms evoke pain and pleasure, as well as exposing vulnerability and a calling for a deeper connection to the self. 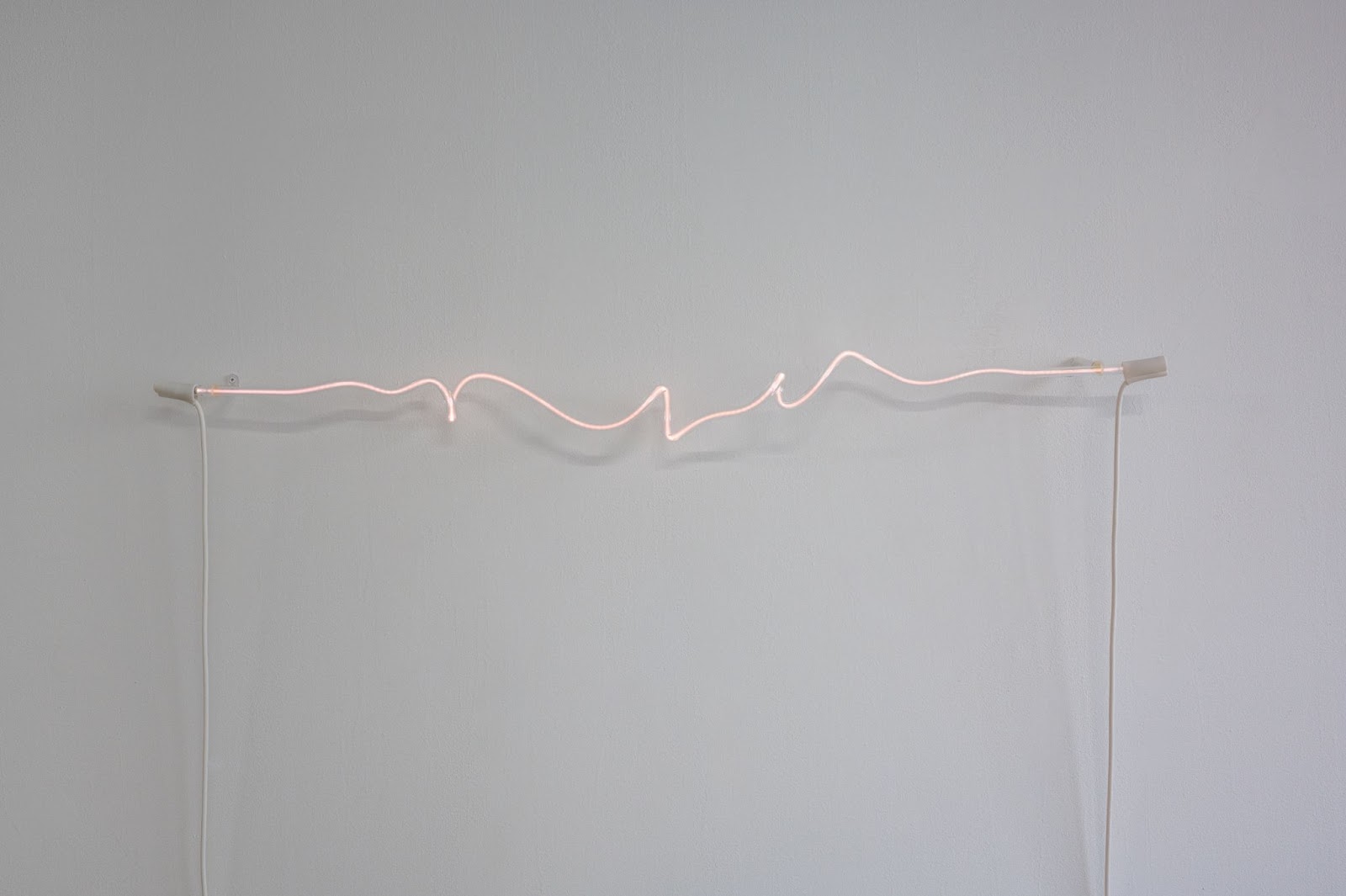 Inspired by how light can affect an atmosphere and create a mood, Annesta Le utilizes neon non-pictorially. At a glass studio in Brooklyn, Le handmakes all her neon-related works and later completes the compositions in her studio. Le approaches each piece organically and the result is a reflection of her inner space captured in physical form. Le’s art is dynamic in its creation - an open, experimental, unpredictable method, balancing the intentional and unintentional.

Rather than by a preconceived notion of her results, Le’s process is guided more by momentum and intuition, a union among alchemy, the Jungian principle of “individuation” and “asemic writing”- a writing form without a specific meaning - open to the viewer’s interpretation. Her use of neon not only allows self-expression, but also connectivity among her body, spirituality and intellectual practices. Working with neon is physical, and Le's process has evolved throughout the years. The materials and lines reflect physical sensation and, essentially, her state of being. Before the creative process begins, Le prepares her body and mind. While making a piece - for hours throughout the day - Le keeps a latex hose connected to a glass tube in her mouth and blows through it while standing over a fire on a ribbon burner.  The resulting compositions are intense, energetic and interconnected, highlighting the spontaneity and uniqueness of Le’s work. 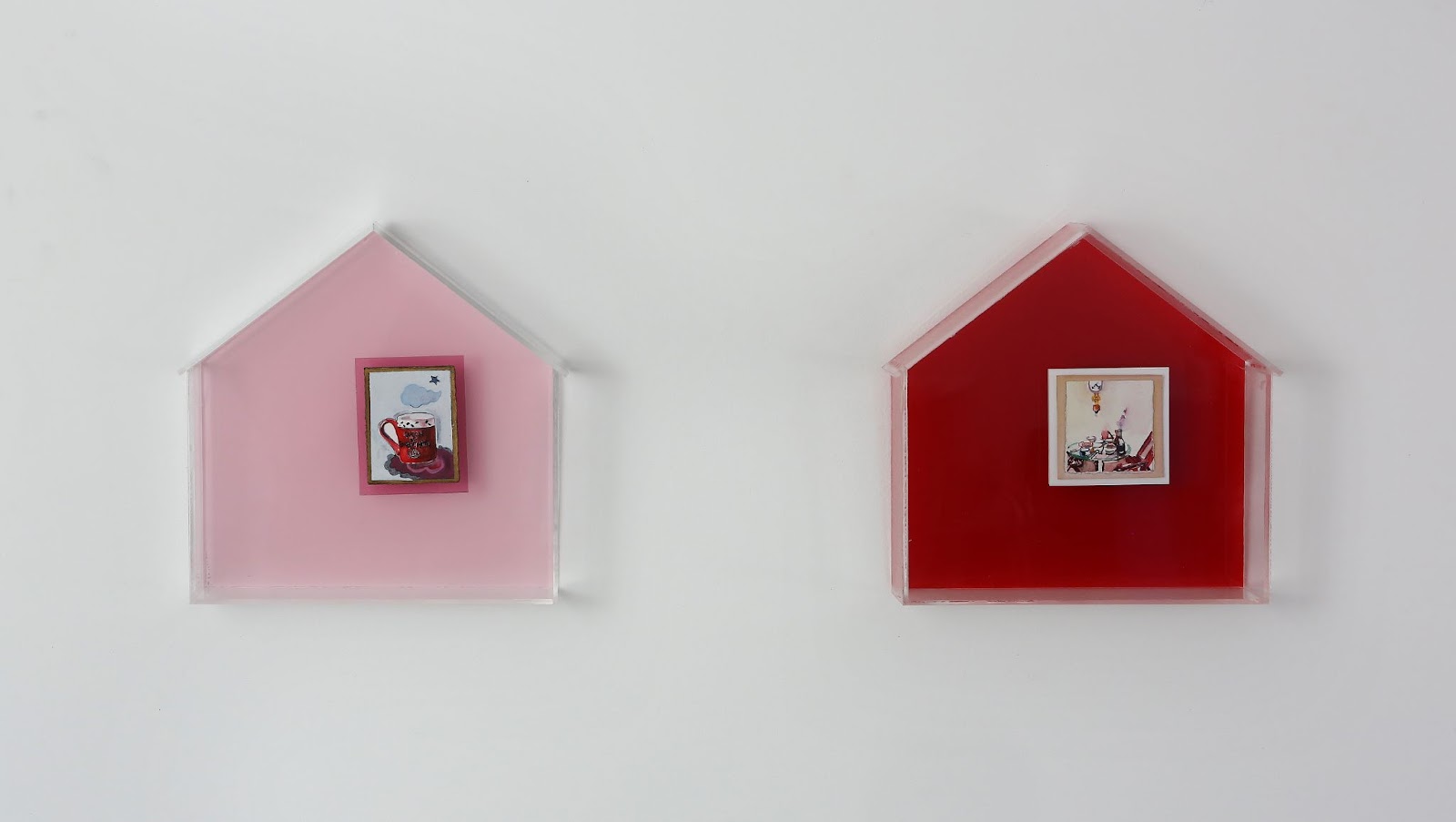 Atlanta-based In Kyoung Chun makes art in hopes of inspiring people to take action in this troubling sociopolitical climate. Her current work depicts intimate, personal spaces in daily life. While juxtaposing simple forms and familiar objects through painting and sculpture, Chun discovers life's optimism and peace - even in its most chaotic and complex settings. Chun believes that discovering and recognizing the sweetness in our everyday lives is essential, and channels this fundamental human quality through art. With an interest in invisible energy and space, she began working with clear and semitransparent materials, such as plexiglass, to build sculptures in the form of houses. Domestic scenes and memory-building moments, such as family celebrations, birthday cakes and deeply personal details, are vivid images in her work. For Chun, the three-dimensional houses ultimately become paintings when hung on the wall.

Originally from Seoul, South Korea, Chun studied psychology in college. When she first moved to the US, she took up painting and became an artist. Constantly looking for warmth and belonging in a foreign land, she uses painting and sculpture to build safe, quiet spaces that we all crave. 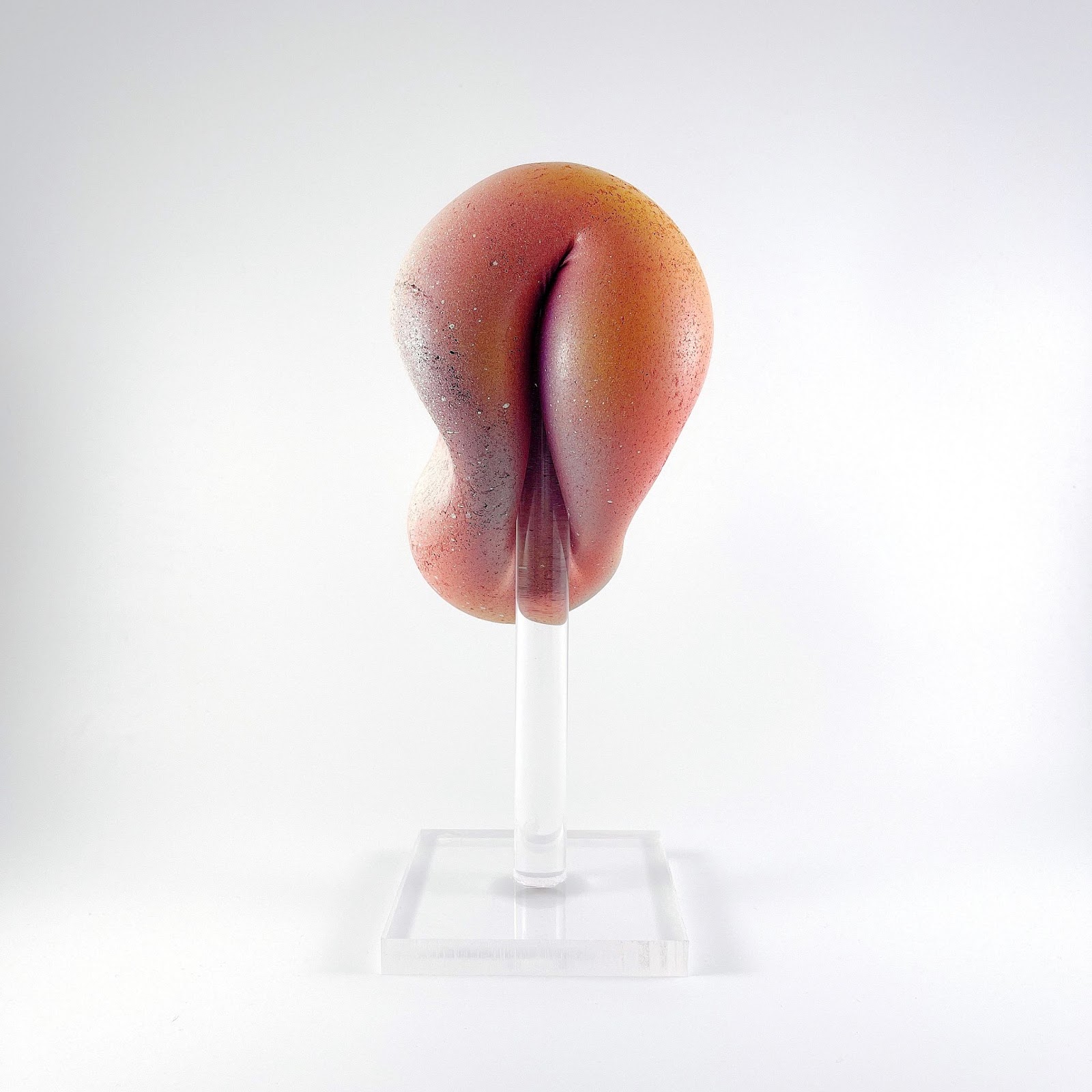 Metabodies is an ongoing series of small sculptures that evoke the hybridity of bodies and the systems they inhabit. Kate Casanova uses materials, such as fungi, bioplastics, video and industrial materials, to create abstract forms that bleed beyond borders, slide over edges and seep through cracks. The sculptures propose a slippery definition of the human in which the body is both inside and outside, singular and multiple and ever changing.

Casanova’s abstract sculptures express hybrid bodies that defy categories, such as human/nonhuman, organic/synthetic and self/other. Western culture typically imagines a human being to be a single organism with a distinct inside and outside when, in fact, our bodies are ever-changing anthro/microbial/fungal systems that shape, and are shaped by, our surroundings. Our bodies are pluralistic and in process, and they change in relation to physical forces such as gravity, energy and entropy, as well as societal forces like social media, global industry and political power. 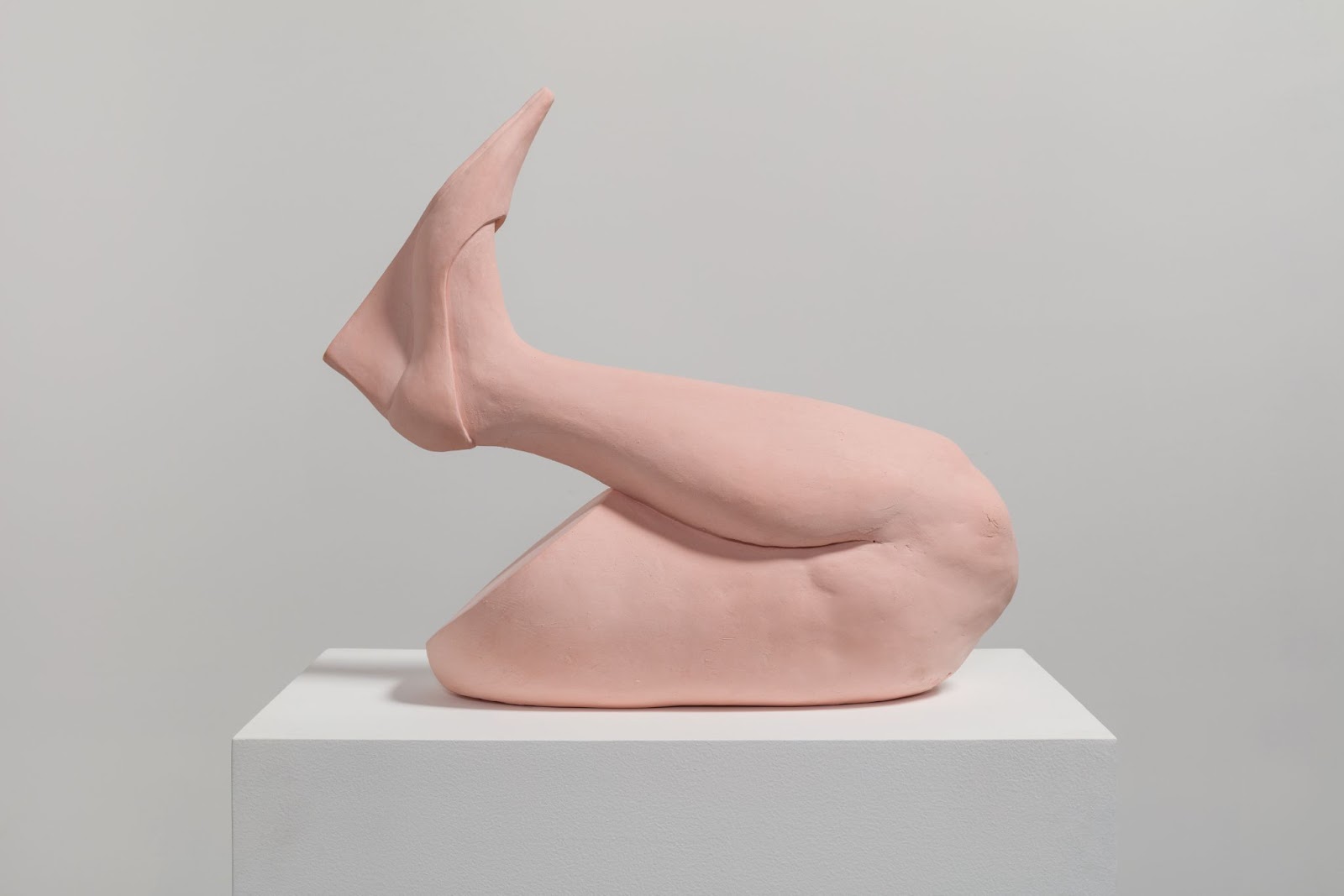 Ashley Lyon’s Pink Leg is simultaneously human and animal. A peculiar and pointy high-heeled shoe perches tensely atop a bent leg. Like a swan or flamingo, its beaked head is luring and curious above its thigh. Fleshy and bulging from its bent poise, it appears either about to strike or give in. Sharply cropped at the thigh, it prompts a complexity of projections about risking, resisting and succumbing to temptations. 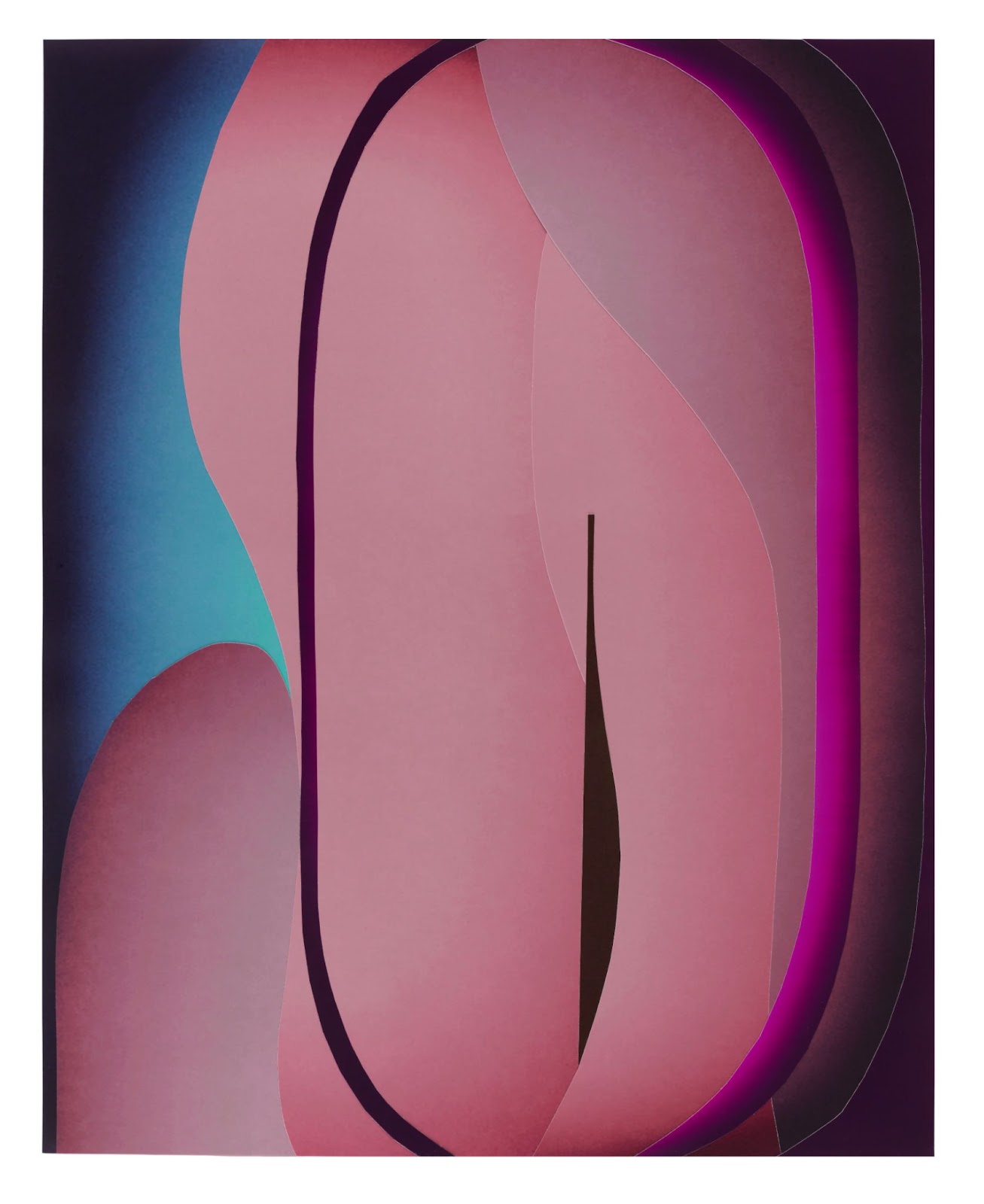 A thoughtful artist with a strong record of exhibitions - and an alumna of both Skowhegan and MacDowell - MaryKate Maher makes lyrical and compelling sculptures and installations work with acute awareness of forms and structures. Her practice is rooted in an enduring interest in landscape, geological phenomenon and improvised forms of site-markings. Throughout her works, gradients play with the viewer’s sense of volume and dimension, and the repetition of specific forms create a unique visual grammar.

Maher’s work and living space had immediate implications for the collage work she made during the quarantine; they branched out of the work she was doing right before the pandemic. Being stuck in a small apartment with her family, all of them on top of each other, she would sneak away and sit on her windowsill and stare out at the world below - listening to the intense quietness, watching the sunsets, seeing the birds and “spying” on neighbors using their roofs for exercise. She thought a lot about light, space and bodies. The colors she was working with were magenta, pink and red -they felt bodily and intensely oversaturated. Maher’s previously neutral palette evolved in this recent work. As she starts to get back to the studio, she sees the work continuing in a new direction as she conceptualizes the meaning behind them: cut forms, saturated colors and finding new ways to create space through flat planes. 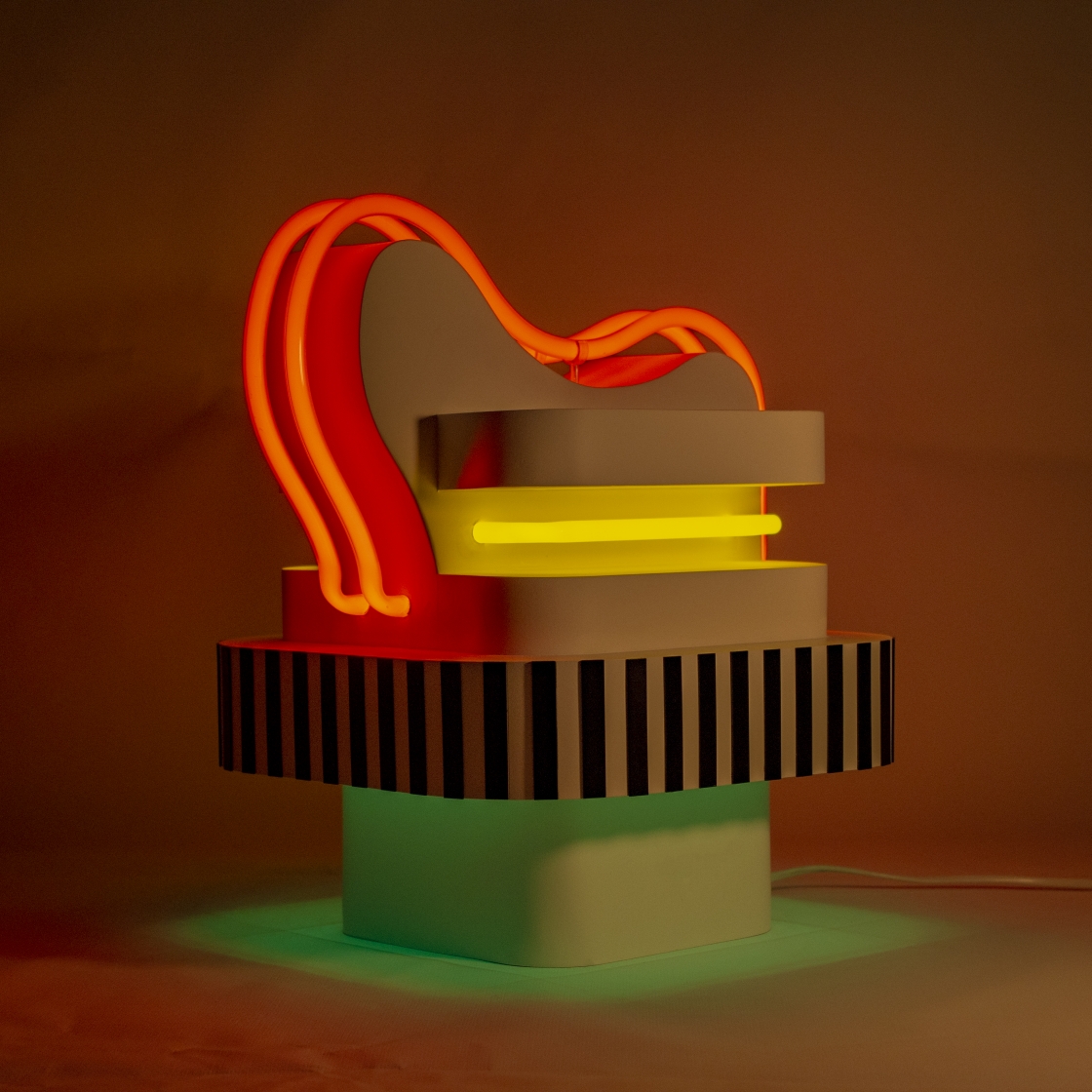 The Ocean Drive Collection, which draws upon bold colours and architecture associated with the Art Deco era, is a unique, limited series of neon sculptures. The project was born when the British designer April Key discovered a large series of lost 1950s Kodachrome negatives, dug up at a flea market in Istanbul. The film revealed a stunning narrative of a Turkish couple who moved to Miami in the early 1950s, bought a Cadillac and took it cruising through the USA. The architectural emphasis and energy of this lost archive was used as the key inspiration, taking its features and embedding them into each light piece to create a modern-retro futuristic city-scape. The collection is primarily constructed out of laser-cut plexiglass, sprayed down to a matte white finish, with its handmade, glass neon carefully blown by highly experienced ateliers in Istanbul. 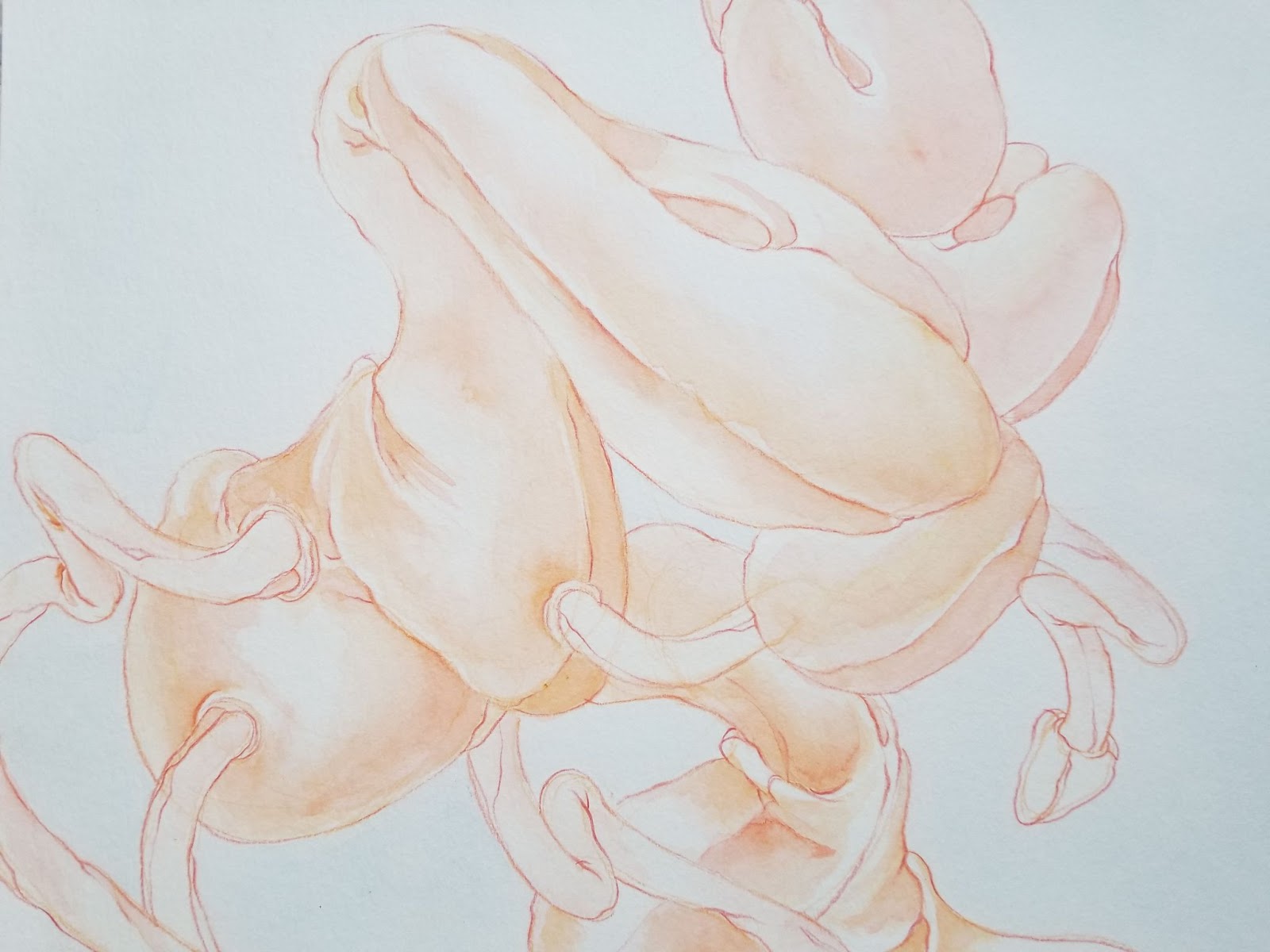 Juanita Lanzo’s artworks are organic abstractions that are evocative of life cycles: birth, growth, decay and death, love and loss, pain and pleasure and healing from trauma. Inspired by anatomy and the natural world, Lanzo is a visual artist, educator and independent curator working in the Bronx and living in East Harlem, NYC. She maintains a studio practice and has shown in group exhibitions with a focus on feminism, Caribbean identity and African Diaspora, body politics, postcolonialism and racism.